Sixty-two years later, on September 13, 1856, there were only two congregations still worshipping at Wenrich Church, Lutheran and Reformed, when they laid the cornerstone for the third and present day house of worship.  Bricks for the building were made by Daniel Moyer on the farm just west of the church property. The new church was completed by the summer of 1857.

The interior included a balcony across the south wall with stairs on either side and a high pulpit on the north wall flanked with "amen corners". Amen corners were where the elders, church officers and their wives sat during services.

The Colonial framed windows were placed so high that worshippers, even when standing, could not see outside. Two aisles divided the pews. Stoves were in the front with stove pipes extending along each wall that warmed the congregation during winter. A 1000 pound bell, brought from Troy, New York, was first rung on October 4, 1857 for the dedication service.

Extensive remodeling in 1891-2 changed the exterior and interior of the building. The balcony was removed, a recessed alcove was added to the north wall, the two entrance doors were changed to one center double door, the steeple was replaced and stained glass windows were added. The finer interior work included wainscoting, carpet, a chancel platform with railing and curved pews on either side of a center aisle.

In 1913 additional remodeling added a tin ceiling and iron - framework kerosene lamps. The property was re-graded and stonework was added.

The original wooden floor is still in the church today. 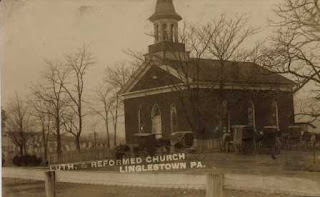 There is a stone marker marking the occasion. 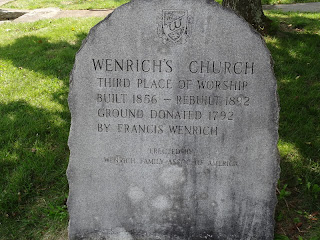 According to Nevin Moyer, the grandson of Daniel Moyer,  during the 1890s:

They had a sexton at the church for many years by the name of Fredrick Farling.  He would stand out in all weather, tie and blanket all horses, and unhitch the minister's horse. He would go out and meet all the members and take the horse from them and care for it during services.  Men always felt safe to let their women and children go to church alone for they knew that the sexton at the church would see that the horse would be properly tied, blanketed and if anything happened during the services he was on the job. He would see that all were safely started for home. 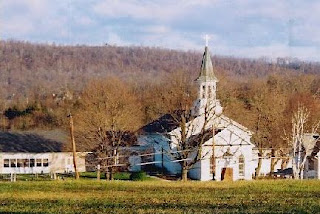 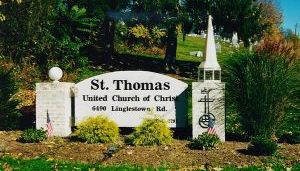 This building stands today and is the home of St Thomas United Church of Christ, a congregation descended from the former German Reform Church.