This article was in The Patriot News, August 26, 1990. Thanks for sharing Ron Stine. 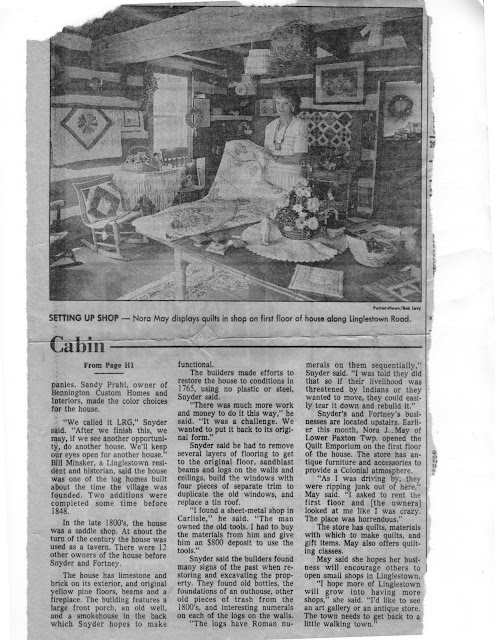 Posted by Unknown at 6:17 PM No comments:

Thanks for sharing, Jay Megonnell

Clipped from Harrisburg Telegraph, 16 December 1910, Page 1
Posted by Unknown at 6:27 PM No comments:

Thank you Laura Gifford for sharing this article

This article was in the Harrisburg Telegraph, November 2, 1918, page 2 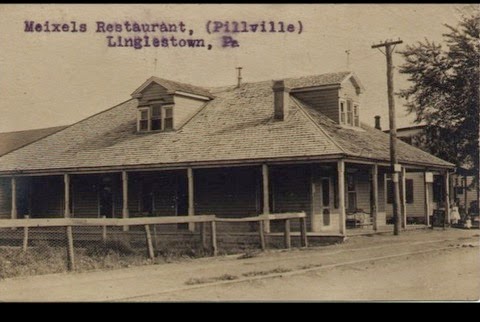 Postcard picture of the restaurant and poolroom mentioned in the article above. The name is misspelled on the picture. The photo says that it is Pillville , Linglestown. Pillville was Larue street. It is believed that Mixell Restaurant was located on North Mountain Road at the end of Larue Street. If you know of the exact location, please let us know, linglestown250@yahoo.com.

Posted by Unknown at 6:00 AM No comments:

The Story of the "White" Color of the Linglestown Fire Co. 1941 Ford Pumper

When the fire company decided to and was financially able to purchase its first new fire apparatus, a very basic question needed to be settled as to what color it should be.  Many members preferred the traditional -  but VERY difficult to see at night RED color.  Other members reasoned that a very non-traditional and rarely used WHITE color would be better, safer due to much better night visibility, and rather unique for the "new fire kids on the block" in the Harrisburg area.  ...so the story goes that at a Fire Company specially-called meeting on September 25, 1940, the vote was given of 18 for the white color, and 10 for red.  As a result, beginning with the new 1941 Ford pumper, all future apparatus of the Linglestown Fire Co. # 1, including all 11 current apparatus units, have been designated to have white color. 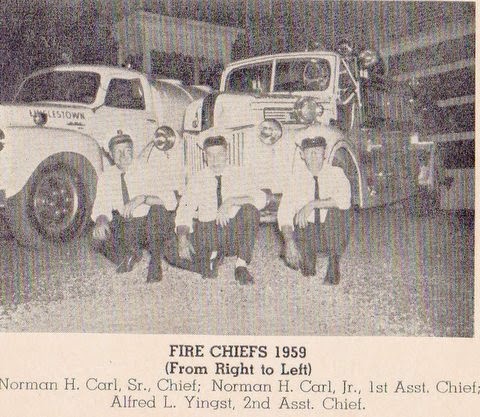 Also in regard to “color” -   Each of the three L. P. Twp. fire companies has chosen a separate station color, to be used to designate and identify ownership of the many pieces of equipment carried on each company’s apparatus that is used for fire-fighting and other purposes.  The color designation for Colonial Park is GREEN, Paxtonia’s chosen color is RED, and the Linglestown color is BLUE.  In addition, all of the Township’s fire apparatus has reflective night-time safety Scotchlite tape in use on its vehicles, and these three colors are also used for this purpose.  Therefore, all 11 pieces of fire apparatus of the Linglestown Fire Co. have bold BLUE Scotchlite attached to its vehicles. 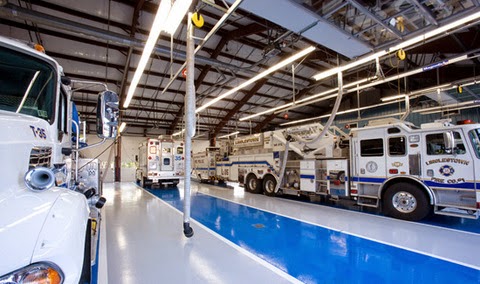 Posted by Unknown at 4:46 PM No comments:

Posted by Unknown at 8:40 AM No comments:

Horseshoers, As Told By Riley Hinkle

This post is taken from Linglestown PA Bi-Centennial commemorative book. As told by Riley Hinkle in 1965 about the last blacksmith shop in Linglestown. 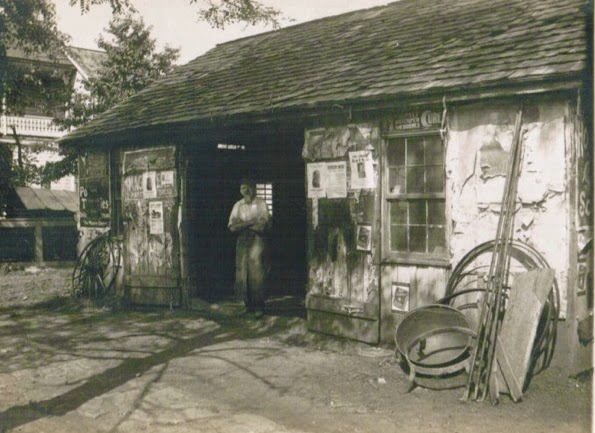 "I bought young Dan out, and he bought from Orris who rented from Reimert, and Aldinger had it before him. Young Dan learned his trade as horseshoer from Orris. At one time the shop changed hands so fast we can't remember just when each owned it. It was an old shop that was standing  there a hundred years. It was an old shop when I was a boy 75 years ago. It was finally torn down and Nevin Moyer's house was built on the spot. I closed up shop in 1923.

When I learned the trade around 1900, some horseshoers were charging eight cents a piece to set a horseshoe, and it was $1.00 for four new shoes all around.  We did other work, all general repairs around a wagon and around farm implements.  There was hardly a day when I didn't set 48 shoes.  I grossed about $3500 a year.  I could shoe a quiet horse when I was 12 years old.  You could make a good living, but you didn't have any spare money so you could buy something fancy or even go anywhere on a trip.

I suppose I was the last blacksmith in Linglestown.  There's still a blacksmith at Grantville, but he doesn't shoe any horses.

In the fall of 1904 the street car came to Linglestown and it changed over to the bus in 1934.  Before 1904, the mail route was by a team of two horses and a wagon.  I didn't do any of the blacksmithing for them because they had their work done in Shellsville or Harrisburg." 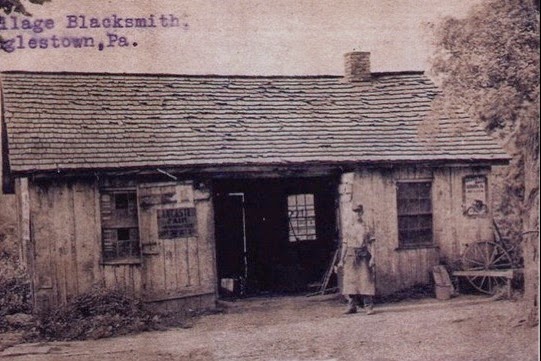 Posted by Unknown at 7:37 PM No comments:

This post is taken from The 25th Anniversary of Linglestown Fire Company commemorative book. The anniversary was celebrated in June 1959.

1898 - End of Paxton Fire Company. History of LInglestown by Nevin W. Moyer relates that the town's blacksmith turned the hand pumper into a very useful wagon for the purpose of hauling beer kegs at the local tavern.

FEBRUARY 28, 1934 - Rev. Elias H. Philips called for a town meeting to be held at the American Legion Home (formerly the chapel of the EUB Church) for the purpose of organizing a fire company.  The fire company was organized at this meeting and the fire chiefs elected to serve one year.

MARCH 22, 1935 - First fire truck purchased. This truck consisted of a Ford, Motel T, chassis with a centrifugal pump, ladders and a booster tank with hose reel. This fire truck was purchased used from the Elizabethville Fire Company, Elizabethville, PA.

APRIL 10, 1935 - First fire house was a garage in rear of Care's home on North Mountain Street located near the EUB Church. This building was torn down when the property was purchased by Clark Basehore.

DECEMBER 6, 1940 - New fire truck purchased. This fire truck consisted of a 95 HP Ford truck chassis with a 750 gallon per minute pump with all the other modern fire fighting accessories.

AUGUST 10, 1955 - Construction of the new wing to the fire house started to provide for three pieces of fire fighting equipment. 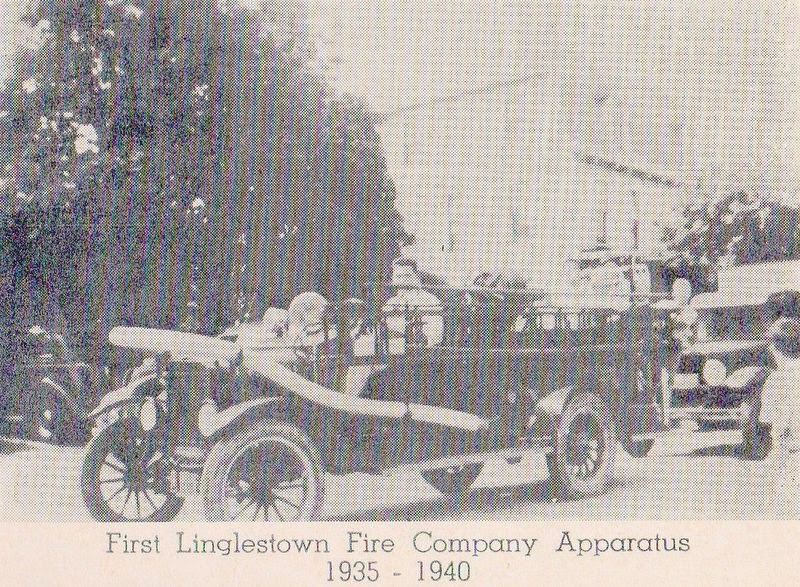 Posted by Unknown at 8:05 PM No comments: