Wenrich's Cemetery is on the grounds of St. Thomas United Church of Christ and is the final resting place of some of the most important characters in the story of Linglestown.

Thomas Lingle was born in 1742 and died in 1811. His tombstone reads that he was a Pvt. Filbert's Co., PA Vols. Rev War. Born in Berks County, the sixth of eleven children, he came to this area in 1765 and built The Town of St Thomas, later renamed Linglestown. 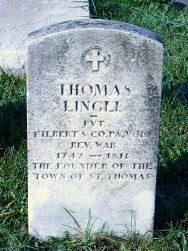 Francis Wenrich was born in 1750 and died in 1827. He married Elizabeth Krieger around 1769. According to his tombstone, he served at Brandywine and Germantown in the Revolutionary War and on the Frontier against the Indians.  Wenrich Street is just across Linglestown Rd. from the St Thomas Church. 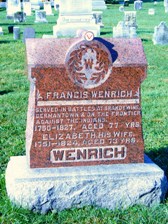 John Eisenhower was born February 5, 1774 and died June 21, 1861. He was the half brother of the great grandfather of the 34th President, Dwight Eisenhower. He served in the Pennsylvania militia during the Revolutionary War and the 5th Class Capt. Henry Snevely’s Co. during the Whiskey Rebellion. 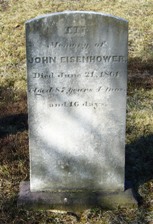 On Sept. 17, 1828 George Pletz was only 20 years old when he died in a most unique way. He and his brother, John, invented a flying machine and attempted to fly from the mountain to their Uncle Brickle’s farm in Fishing Creek Valley. The unsuccessful test flight came to an end when they crashed, killing George and leaving John with a broken arm. 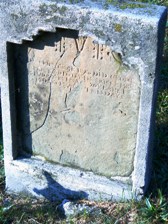 She was known as Mary Greene, Mary Redd, Mary Taylor, White Feather, and Eagle Feather, and she died on August 24, 1939.  According to her obituary, she was a Native American princess from the Quinabella Sioux Tribe of the Dakota territory, found as a baby by her uncle in the arms of her dead mother after a massacre by the American government. 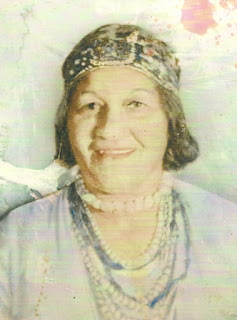 Chief Sitting Bull was her second cousin and Chief Iron Tail, the model for the Indian Head Nickel, was her uncle, the same one who found her alive after the massacre.  When she was young, she was sent to the Carlisle Indian School. She was there at the same time as Olympic athlete, Jim Thorpe.  After finishing her education, she chose to stay in Central Pennsylvania. Her first husband was Charles Redd.  Her second husband was Carl C. Taylor, also known as Chief Running Wolf, a member of the Miscelearo Apache Tribe of New Mexico. She was not a member of Wenrich’s Church, but her burial was in the cemetery. 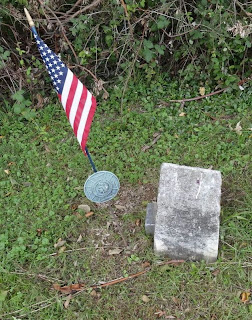 Princess White Feather's funeral was attended by many Native Americans.  She was buried in full native dress along with a bow, three arrows, and a pipe that was over 100 years old. 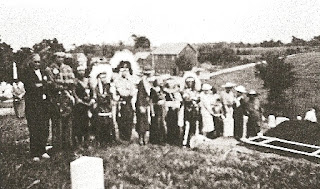 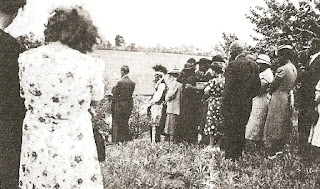 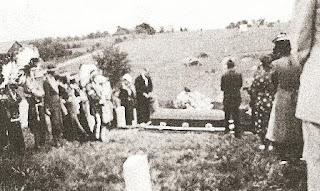 In the early days of the church and cemetery the property was surrounded by a fence. The custom at the time in the area was to bury “the devil’s people” in the land outside the fence.

According to Wenrich 1791 Rules and Regulations of the church, when a person “falls from his Faith”, officers of the church were to go to him 1-2-3 times and then if he falls again, when he died, he was to be buried on the outside of the graveyard with the devil’s people . These people were not even given the respect of having their graves marked. 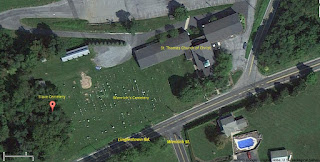 In the early days of Linglestown, some of the wealthier settlers owned slaves.  When the slaves died, a place was needed in which to bury them.

Fifty feet west of Wenrich's Church, outside the cemetery fence, was the first edition to the old cemetery used for the purpose of burying slaves.  There are no known records to identify the slaves or to tell us how many, but it is thought a large number of slaves were buried here in unmarked graves.  Because there are no records of where the slaves were buried, as grave diggers dug new graves, human remains were discovered.  As recently as October of 1938, a full grown skeleton was found.

It is believed that the slaves were buried there between 1730, when the first church was founded, and 1793-4, when Wenrich's Church was built.  In 1780, An Act for the Gradual Abolition Slavery was passed by the state legislature of Pennsylvania, the first attempt in the western hemisphere by a government to end slavery.  So, it is unlikely that many slaves were buried in Wenrich's Cemetery after 1770.


The Moyers
Nevin and Sarah Moyer are buried in the only above ground tomb on the south hill part of Wenrich’s Cemetery's newer section, across Linglestown Road from the original church and cemetery.

They are still accepting burials.