Some time in the year 1843, work was started on the Church of the United Brethren in Christ in Linglestown at the top of North Mountain Road, overlooking the square.  The church was a frame building, about 30 feet by 49 feet, with two front entrances, one for men and one for women. This first building stood until it was destroyed by a fire in 1903. 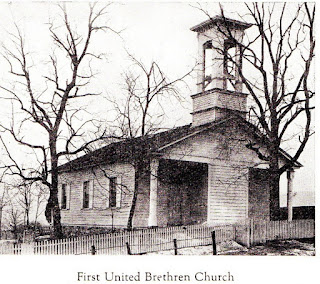 In 1905, the second church was built with various renovations and improvements that allowed the congregation to use the building until 1949. The 100th Anniversary of the church was held here June 6-13, 1943. 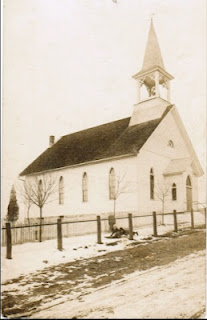 The second church was enclosed in brick and an addition was added. This building is the current church and was dedicated on December 18, 1949.


The picture below shows you the church and the house at the top of the hill where the minister and his family lived. It is no longer located there. If you go to the top of the hill and look to your right, you will see where that house was moved to and remains today. 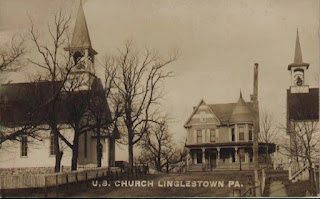 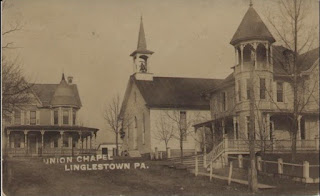 Across the street from the church was the Union Chapel, built in 1891 as a place of worship for people of all denominations. The chapel was in use until 1931 when it was disbanded and became the first home for the Linglestown American Legion.

In 1958 the American Legion Post 272 transferred the chapel building  to the Evangelical United Brethren Church for the sum of $1. It was used as a chapel and housed the Junior Department of the Children’s Sunday School until the present education building was built.

On June 10, 1962 a ground-breaking service was held and construction began on a three floor Christian Education Building, which replaced the Union Chapel, and reconstruction of the interior of the sanctuary was started.

Today the church is known as Linglestown Life UMC

All early churches had graveyards, theirs was on the south side of the church. There are only two graves there now, Peter Kramer, a veteran of the War of 1812, and the other grave contains remains of all the earlier burials, a decision approved by a court order.