In 1720 the first school in town was built in combination with the the first church at Wenrich's, now St. Thomas UCC. It was a one story log building located a half a mile east of Linglestown. The building had a church and school in one half and a home for the minister and teacher in the other half. It was called Wenrich's Parochial School.

Wenrich's Parochial School was used until 1790 when the students were then moved to the The Town of St. Thomas Log School. The Log School was twenty feet wide and twenty feet long and stood on the eastern part of town. On the north side of the building were two windows and the desks for the male students. The door, teacher's desk and window were on the east side of the classroom. On the south end was one window, and log seats and desks for the female students.  The west end had two windows, a long bench against the wall, and bench and desk for the big boys. A ten plate stove was in the center of the room and a small space up front for a blackboard. The windows were chin high so that the pupils couldn't look out. The students attended the log school until 1843.

The log school was built before the days of the free schools as we know them. The teacher was paid a penny a day for each pupil by the parents. If the parents could not pay then it was paid by the poor house. School attendance was not compulsory in those days. 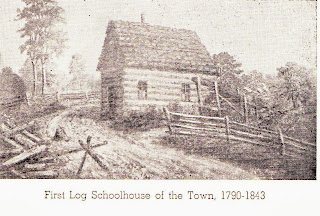 In 1843 the students moved to a new school on the northern hill above Linglestown. Because of its location it was named the Hill School. The building was forty feet long and thirty feet wide. At one time it had one hundred students. Mr. Charles Mytinger was the teacher and was paid twenty dollars a month for four months of teaching each year. This school was also used for church purposes.

An incident happened at the Locust Hill School.  When a teacher demanded that a girl student, who was much heavier and larger than he was, do a certain lesson, she refused. He was going to force her to do it so she took her small slate board and hit him over the head with it. The slate broke and the frame of the slate hung around the teacher's neck. The girl left school and ran home, never to return.


After the Hill School was closed in 1859, the students were transferred to a new brick school which had been recently built. One of the teachers there,  Mr. Joseph Eichelhart, was especially liked by the children and their parents. When he came to Linglestown to teach, he brought wooden handled jumping ropes for the girls and was the first to introduce the game of football to Linglestown.

In 1876, construction began on the Linglestown High School building. It was built at the west end of Linglestown. There were three sections taught at this school: primary, intermediate and secondary education. The secondary school was established in 1910, composed of a two year course. The first graduating class in 1912 had six members. The brick building was used until 1931 when it became the location of the Linglestown Fire Company. 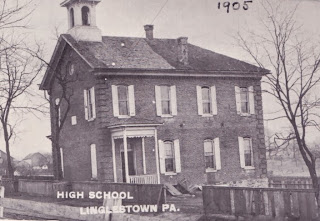